Strike while the iron is hot. Make hay while the sun shines. Maximize your moments. We’ve heard all of those cliches forever because they are true.

I get to work with a great young rock band called Nine Mile High.  And let me tell you what, these guys – (l to r) Tanner Marion, Patrick Irwin, Carter Pankow and Tate Richardson- ROCK!!!!

Lead guitarist, Tate Richardson definitely gets it.  Recently, he found out about an industry party that one of his favorite producers, Joey Moi, would most likely be attending. I suggested we go and we politely and elegantly crashed the party. 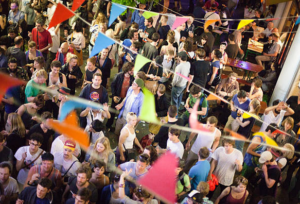 As suggested, Tate did his homework and found out what Joey looked like and a few key things to discuss when and if he met him. (I jokingly refer to this method as my “hit list”.  Whenever you are attending an industry event, make a list of the people you would most like to meet and do a little research to maximize your moment, should it occur.)

Soon after we arrived, Tate spotted Joey in the crowd and we made our way over.  I introduced myself and then introduced Joey to Tate.  I mentioned that I was working with Tate’s band, Nine Mile High. (No, we did not ask him for a photo.) Tate shook Joey’s hand, jumped right in and asked a specific question about a recording technique Joey had used on the Nickelback recordings.  Joey’s face lit up in a big smile and he exclaimed, “Wow! No one’s ever asked me about that before,” and he went on to explain it to Tate in detail.  Then he asked Tate about his band.

Tate told him a few key points about the band and then it happened.  Joey invited Tate to send him some music to his private e mail address. BAM!!! We thanked Joey for taking the time to speak with us and allowed him to get back to the celebration.

We realized that the strategy had worked and we maximized our moment! Tate was ecstatic and so was I!

The next morning, Tate followed up with a personalized email to Joey including links to Nine Mile High’s music. We eagerly await his response, but know that it may take awhile.

But here are the key points:

Maybe I’m the guy to be on your team and assist you in maximizing YOUR moments.  Maybe not.  But isn’t your career worth at least taking these steps to find out?