On this Independence Day I salute all independent artists.  I wholly support them because they face challenges at every turn. But the best of the independents like my client, award winning singer songwriter DeDe Wedekind, embrace their independence, make a plan, build a team and make it happen.

My colleague, publicist Brian Mayes personally introduced me to DeDe, but I had known about her music from my role as a Broadjam Pro Reviewer. In that role I get to review songs from independent artists and writers and a month or so before Brian introduced me to her, I reviewed her song, My Unsung Hero.

When I met her in January, she had a strong social media presence on Facebook and Twitter (over 120,000 fans), a robust website and had released five CDs.  She also had just written and recorded a song called America United, which she planned to release.

She embraced her independence by boot strapping her own career. 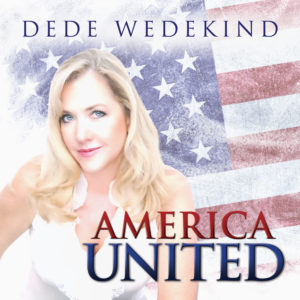 With Dede’s unique vision for her career, Brian’s expertise on the publicity front and my knowledge of the industry, we devised a plan and put it into motion.  Not only utilizing traditional radio, we also courted the talk radio format and got her interviews by talk radio greats Michael Harrison, Phil Valentine and others including Otto D’Agnolo.

She continued to build her social media numbers by being hands on with her own accounts.

Her television appearances included Nashville Today and TCT Network’s Celebrate Live and her songs gained traction and established a footprint on both internet and terrestrial radio, Pandora and Spotify.

In other words, DeDe was not interested in waiting for things to happen.  She made a plan and made them happen herself.

Her team also includes her husband, Larry, with whom she has started a charity called Matthew’s Hope in memory of their late son. One of her forthcoming projects is a tribute to Matthew.

DeDe has built a team which allows her to be the best artist she can be.

Maybe I’m the guy to be on your team and assist you.  Maybe not.  But isn’t your career worth at least taking these steps to find out?

2) #TakeTheTwenty This free step will help you and me assess where you are and where you need to go from here.

3) Reach out to me chris@chriskeaton.com  Let’s discuss how I may be able to assist you.

Industry Networking – It’s Who You Know

Zombies and Puppies and Hills, Oh, My!