Nancy and Lee. Sinatra and Hazlewood, that is. These Boots Are Made For Walking. He wrote and produced many more hits but I’ll stop right here for now. 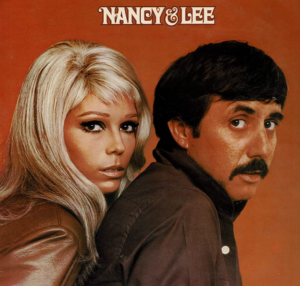 The late Bo Goldsen introduced me to Lee in the mid ’90s. Lee and I developed an ongoing friendship and professional relationship until he died in 2007.

Lee was rather eccentric. He loved to talk on the phone.  He also loved to communicate by fax machine (remember those?). He refused to send or respond to email. He always spoke and thought in terms of being creative whether discussing songs or song casting ideas. He never wore any color other than black whenever we met and I’m not sure I ever saw him without sunglasses.

Early one morning in 1998 or 1999, the phone awakened me. “What are you doing?’ asked Lee in his familiar raspy voice.  I told him I had been asleep.  He replied, “Good.  Get up and come meet Nancy and me at Pancake Pantry.” I asked, “Nancy?” He said, “Sinatra, of course.  Knock on the back door and tell them you’re with me.”  Click.

Still kind of confused, I awoke Gina and told her we were going to breakfast. (I left out the Nancy part but told her she was going to meet somebody special.)

Twenty minutes later I knocked on the back door at Pancake Pantry.  David, the owner opened the door, smiled and said, “They are waiting for you.” I looked into the center of the dining room and saw a man in black with a black ball cap and sunglasses and a beautiful woman in black with sunglasses.

We got seated and Lee introduced Gina and me to absolute music royalty.  As the conversation went on I noticed she cared more to hear and know about is than to talk about herself.  We had a delightful time which will never be forgotten.

Thank you, Lee and Nancy for the memory and the enduring music.

Zombies and Puppies and Hills, Oh, My!